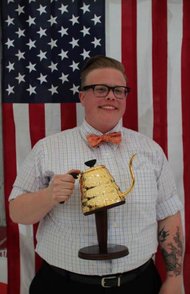 Pete Licata of Parisi Artisan Coffee in Kansas City, Mo., won the 2013 World Barista Championship on Sunday in Melbourne, Australia, becoming only the second American to win the competition, which was established in 2000.

Mr. Licata wasn’t the only American to triumph in Melbourne. Erin McCarthy, a machine technician for the Counter Culture Coffee training center in New York City, is the winner of the 2013 World Brewer’s Cup.

This year, 51 competitors participated in the World Barista Championship. Each contestant is allowed 15 minutes to prepare three drinks for a panel of four judges, which scores the coffee, while other judges score the barista’s technique. The drinks include a round of espressos, a round of cappuccinos and a round of a “signature drink” that must include espresso and may not include alcohol.

Mr. Licata, 35, used coffee from Colombia grown on Finca La Primavera, a farm owned by Arnulfo Leguizamo, who won the 2011 Cup of Excellence with a coffee that sold for a little over $45 a pound when high-quality beans were trading for about $2.83 a pound. (You can read a detailed account of the coffee on this post from Sprudge.com.) Mr. Licata’s signature drink was cocktail-like in composition and execution, according to an account posted byBarista Magazine:

Back to the simplicity of his routine: Pete only has three ingredients to his sig drink, and espresso is one of them. The other two: a palm sugar simple syrup that he created at the beginning of his performance. He also puts dropper fulls of a mixture of orange peel, lemon grass, bitters, and quinine, into the espresso.

While the World Barista Championship focuses on espresso, the World Brewer’s Cup is about brewed coffee, which must be prepared by hand. Mr. McCarthy, 34, used the Wave from Kalita to brew coffee from the Lino microlot produced by Hacienda la Esmeralda in Panama, the most celebrated coffee farm in the world.

In a series of e-mail exchanges, Mr. McCarthy explained that he was aiming for uniformity in what might be called the Goldilocks approach: don’t overextract, don’t underextract, get the extraction just right. “I used a Kalita Wave, because its flat bottom creates a horizontal column of grounds, through which the water can flow through and extract each particle uniformly,” Mr. McCarthy wrote in an e-mail. Also, he obsessed over the details. He continued:

I sifted out the fines with a 425 micron screen so that my particles would be more uniform in size and therefore extract the coffee more uniformly (uniformity was a concept that I talked about during my presentation). I started out with a high flow kettle, because that’s when i wanted most of the agitation (which equals extraction). I then switched to two flow restricted kettles, and with these I was able to maintain a column of water over the coffee grounds, brewing all three at once.

You can watch Mr. McCarthy’s full competition routine at Sprudge.com.

about the author: Gordon

By profession, Gordon is a real estate developer. His passions, however, are traveling, reading, photography, dining, and coffee. He counts himself blessed to be able to travel for work. Through the years, he has acquired a love for independent owners and their dedication to entrepreneurial business. He is not a chain type person although he understands that processes and procedures can yield consistency and predictable quality. So whether it is his pursuit of various foods and tastes from all over the world or a shot of espresso, Gordon is seeking out that spirit of independence and the unique and personal touch it brings to flavor, atmosphere, and coffee.

« Does Terroir Matter in Coffee? This Is Your Brain on Coffee »

Want to become a contributor?